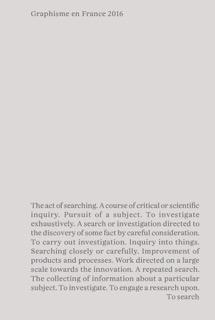 The 22nd edition of the review Graphisme en France is now available online in English, published by the Centre national des arts plastiques (Cnap), and explores the question of research within the field of graphic design and typography. Research comes in many forms and guises, be it part of an art school project or university programme, or the work of graphic design studios. This non-exhaustive survey is composed of articles specially commissioned from a range of researchers within this rapidly expanding field. Éloïsa Perez, a designer and researcher, provides an overview of recent and current research in France, while Alice Twemlow, a writer and lecturer, tells us about research projects carried out in a number of countries outside France. As for Catherine Guiral, a graphic designer, she shares the different directions her research on the work of Pierre Faucheux took her in. Annick Lantenois and Gilles Rouffineau, both teachers at the École Supérieure d’Art et Design Grenoble-Valence, present the research programme they oversee there, and, notably, its implications for education. Typography is a distinctive field of research with its own programmes, described here by the historian-cum-researcher Sébastien Morlighem. And lastly, Catherine de Smet, an art historian and lecturer, tells us about her research on the Grapus collective, undertaken as part of a collaborative venture between several institutions, which led to the publication of a book. Alice Jauneau and David Vallance, graduates of the Atelier National de Recherche Typographique (2014–2015), were responsible for the graphic design of this edition, for which they looked to the layout and visual vocabulary of publications intended specifically to transit knowledge. They chose to use a new typeface, Walther, developed by Sarah Kremer for her research on a dictionary.