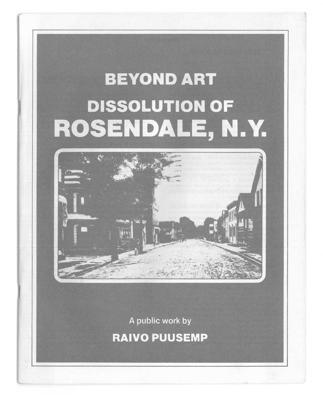 One of the most exceptional documents in the history of concept art -- made up of archival material from one of the most thought-inspiring operations in the history of art on the 1:1 scale -- is now available once again. Beyond Art - Dissolution of Rosendale, N.Y. traces New-York conceptualist Raivo Puusemp's two-year tenure as mayor of the chronically conflicted and debt-beleaguered village of Rosendale, N.Y. between 1975 and 1977, from his election campaign to his resignation after successfully redrawing the political boundry lines, dissolving the bankrupt village and incorporating it into the neighbouring township of the same name. Puusemp's intervention, if indeed it can be called that since he carefully avoided such artworldly jargon and at no time boasted that what he was doing was “art”, has virtual urban-legend status in concept-art circles, after having been famously championed by Allan Kaprow in The Blurring of Art and Life. As recent interviews suggest, Puusemp's self-understanding as to the status of his political involvement and its outcome -- was it an artwork? an art-informed process? -- evolved over the course of his term as mayor. Yet, as he makes clear in his pithy introduction, Rosendale, A public work stemmed directly from his conceptual practice. It would be Puusemp's last acknowledged artistic project. And indeed, given its radically low coefficient of specific visibility, it is only thanks to Puusemp's longtime friend Paul McCarthy that these documents were assembled and published at all -- in 1980, by the now defunct collective, Highland Art Agents. Upon resigning as mayor, Puusemp left Rosendale forever, moving to somewhere in Utah, thereby joining the nebula of "offroad conceptualists" who have withdrawn from the artworld attention economy into the shadows, never performing what they do as art.
Stephen Wright