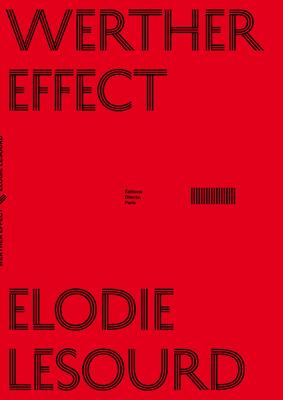 The work of Élodie was made for us. Straddling the frontier between rock and contemporary art, on the erudite and obsessive side, it can withstand facile fetishization as well as nostalgia for the rebellious aesthetics washed out by time. Perhaps there’s a form of post-art to match post-rock, but the artist doesn’t waste her time rambling on: she paints. Here, form freezes concept and concept freezes form, just as concept burns form and form burns concept. There’s torpor and fixation there, as so often where painting is concerned, but the artist also shares a profound reflection on what constitutes an image. How it conveys and breeds culture (in this case a sub- or super-culture) and how culture falls apart over time... An on-screen book sparkling with restrained energy, a terrific exploration enabled by the iPad zoom.
Thank you, Élodie; thank you, Thibaut; thank you, Delecta.
Art Book Magazine

Werther Effect is a selection of works by Élodie Lesourd exposing hyperrockalism, being the exact pictorial reproduction of views of an exhibition, where the main object in the image is to be represented life-size.This concept is of the artist’s invention, and a central part of her work. Élodie Lesourd paints views of exhibitions, ephemeral installations showcasing objects, codes and aesthetics of rock culture. Once an image is found, she embarks on a patient work of painting to get as close as possible to the original. The fetish objects of rock culture, “objects of adoration which, by their mere presence, provoke craving and desire” - a black Marshall amplifier, a 1950s Les Paul, a chromed 3.5 jack plug - become the life-size heroes of her paintings on wood. With this appropriative play, the artist builds, exhibition after exhibition, a different history of art as well as a veritable anthology of rock. And if her works “throw a reflection back at us, [they] also absorb us in the darkness of their frozen material. The smooth surface of a mirror makes fears and desires surge out of its infinite depth”. Three essays by Thibaut de Ruyters, Marco Costantini and Hunter Hunt-Hendrix - rock experts, all three - put in perspective and comment the artistic approach of this rising artist rising of the French scene.
Dilecta