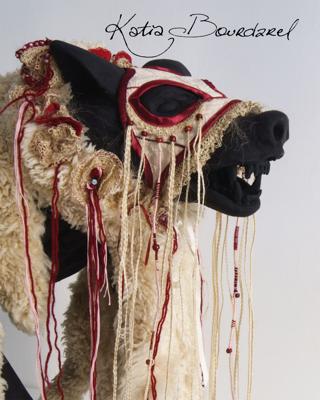 The circular demand… The staged demand, exposed, liberated and revealed; it is a demand that requires the being to spread out in an oscillation that is turning around, a movement that goes from the innermost to the outermost, from non-developed inwardness to alienating actingout. Maurice Blanchot was probably one of the first who clearly identif ied this turn of mind before adding “…alienation that acts out until it reaches a fulf illed and re-internalized fullness. A movement that is endless yet accomplished”. There is indeed this dizziness in Katia Bourdarel’s works, a sort of reenergizing that, beyond figures, beyond what there is to see, opens onto the unfathomable relation that each and every one of us maintains with reality. It is an essential and paramount question, probably the only one today worth being asked. This relation to oneself unveils the unfathomable difficulty to transcribe again what the world gives us, and what we give to it in return; from this relation springs the strange conviction that there is in this act something that gets lost and that fades. Hence the artist’s will to work using inspiration from her immediate environment, her experience as a woman and also as a mother. However, this artistic way of doing things should not be seen through the easy prism of feminism or even a social protest. It would actually be the contrary. Katia Bourdarel’s need to tell us about herself and the world is implicit, almost hidden, concealed, and embodied in a few themes that are as many veils that should be lif ted carefully. Actually, the entire work of this secretive artist fights our world. It fights everyone giving in to the endless ferocity of an outrageous liberalism which sole aim is to transform our dreams into duly quantified needs. Katia Bourdarel bears in mind this stimulated resignation that is the privilege of our civilizations, and turns it over and inside out, proving at the same time that it is still possible to re-enchant our world.
Damien Sausset